Powell Construction was named the 2016 Contractor of the Year in the Northwest Region for Residential Interiors over $150,000. The CotY award is a competitive, renowned remodeling award with highly detailed application requirements. The award- winning project “Open Concept Living” in Corvallis, OR encompassed significant changes to achieve a versatile and open concept space. The new design, which included removal of load bearing walls, the addition of many windows, and installation of all new finishes, completely transformed the home. 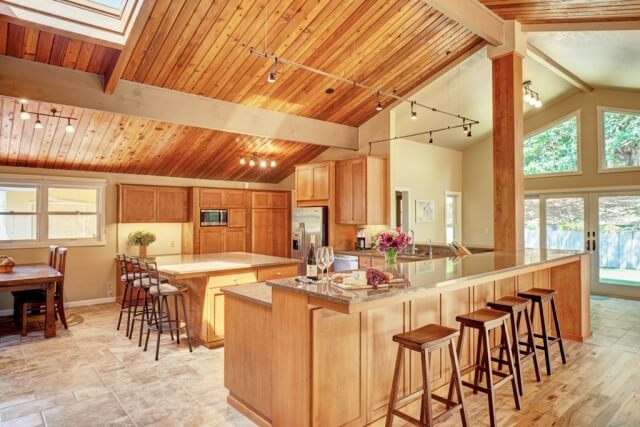 When we first walked into this home, we were struck by the contrasting perspective of a relatively large house that felt small because it had many small and dark rooms. The homeowners told us that their top priority was to open up these spaces and let in more light. They hoped to make their home’s layout more functional for how they live and entertain.

With that in mind, the focus became creating an open living, dining, and entertaining concept, centered around the kitchen, to fit this family’s needs. 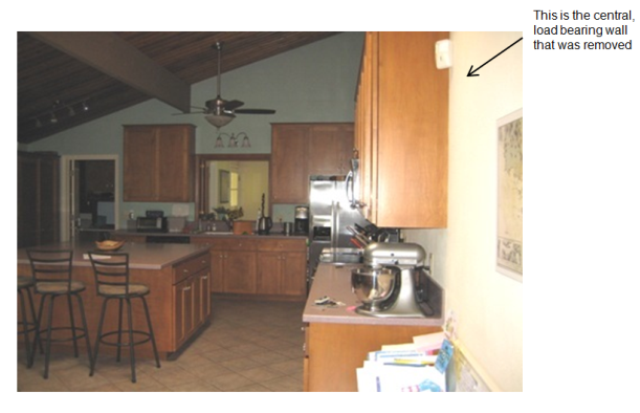 The kitchen, dining, and living area were closed off from each other with a central load-bearing wall. We removed this wall (indicated in the photo above and the existing floorplan below) between the dining and kitchen, and also removed the wall between the kitchen and sunroom. This not only accomplished the goal of opening up the space into a greatroom concept, but also added architectural interest.

The removal of the bearing wall required reframing of the exposed structural members of the existing skylights to accommodate the vaulted and wood-paneled ceiling. Posts were incorporated into the cabinetry to minimize their visual disruption of the space. One post was partially concealed with wine storage and additional cabinetry, while the other was integrated into a breakfast bar. 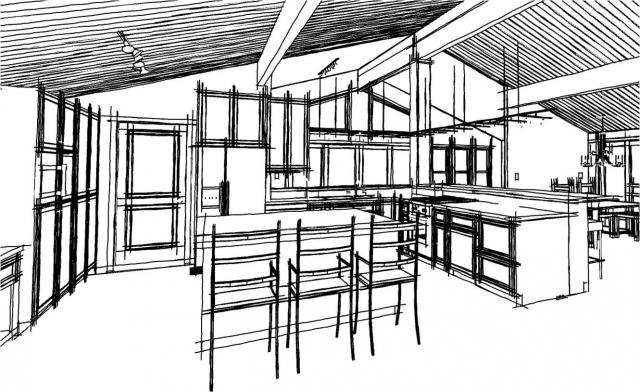 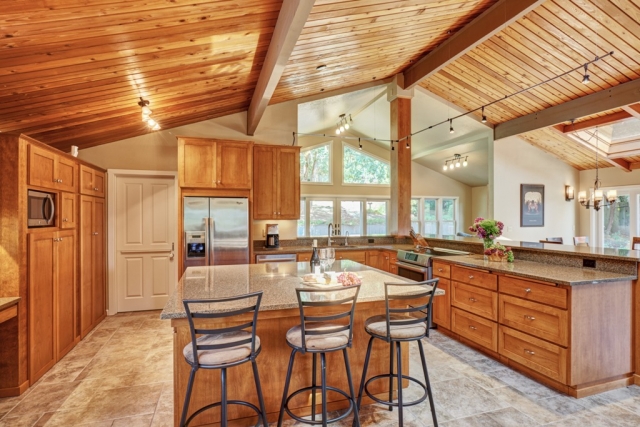 Vaulted ceilings pose their own design requirements when considering lighting. To ease these challenges, the design of the central post included a hidden electrical chase for running wires to the overhead lighting, eliminating the visual disruption. WAC rail lighting with low voltage monorail spot lights are suspended by cables over the kitchen to provide both general and task lighting (shown in elevations 3 and 4). 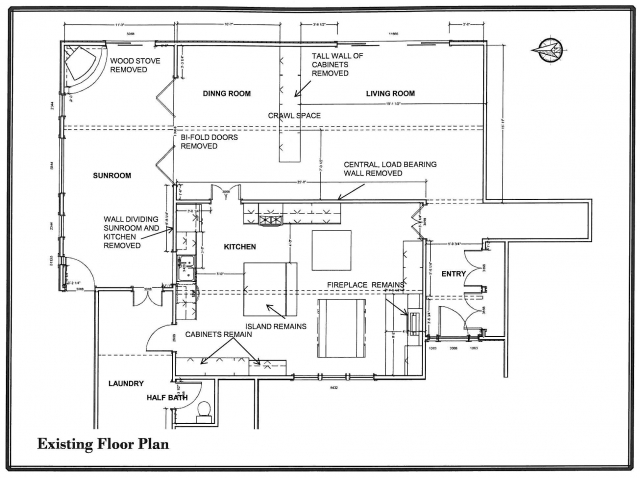 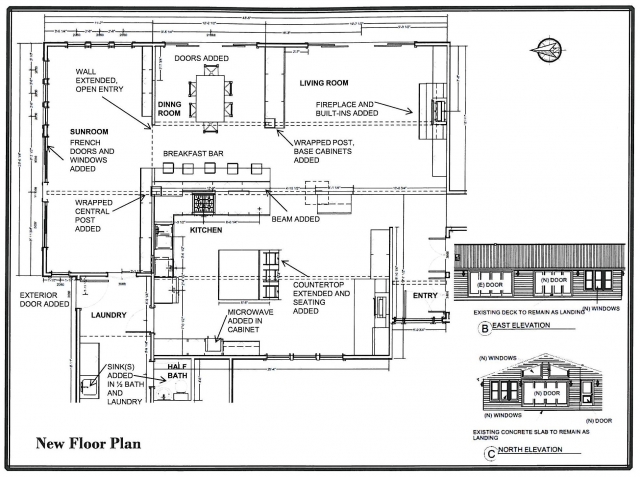 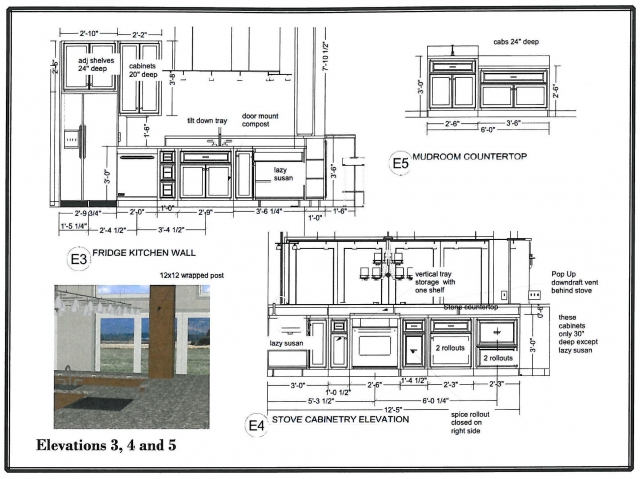 An eating bar was a high priority for this family, proving to be great for entertaining and for quick family meals on the go. Some of the original cabinetry in the home was incorporated into the design and new maple custom cabinetry was stained to match in order to achieve a cohesive look. Overall, the new kitchen closely mirrors the layout of the original, but takes on a whole new look. 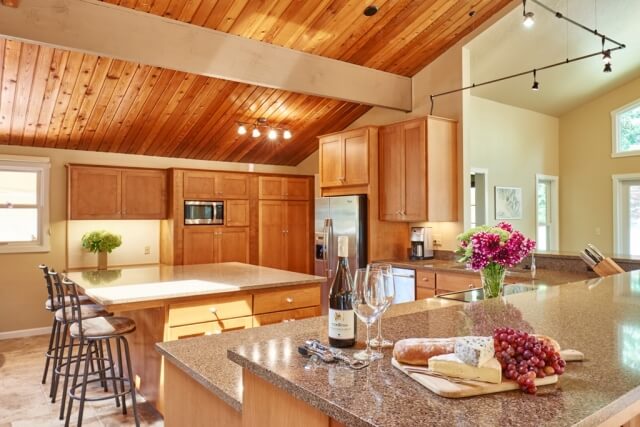 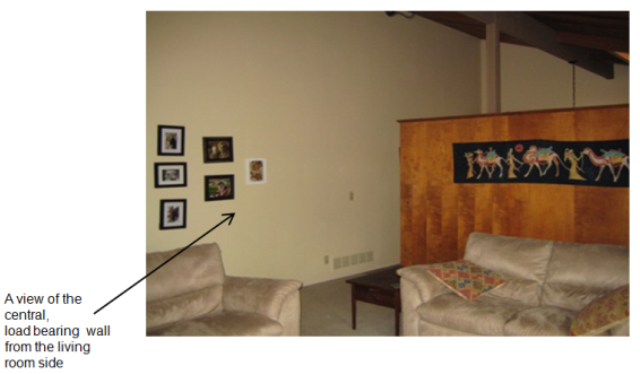 A small sunroom at the end of the house served as a nice sitting room, however, ironically it was rather dark. The layout let light only into this room and it was closed off to the rest of the home. 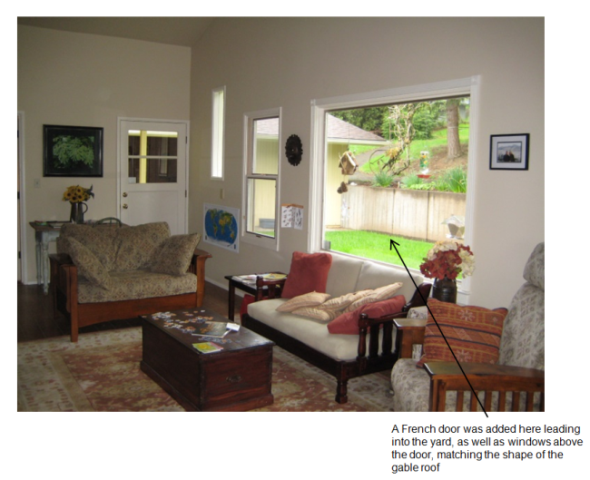 Walls were opened up between the sunroom and the kitchen to create a more spacious, inviting area. The new wall of windows illuminates the entire interior of the great room with natural light, transforming the sunroom into the homeowner’s favorite room in the house. Many Andersen wood windows were added to the sunroom, including some higher windows in the gable to let in more natural light and to capture the view of the forested, upward sloping backyard.

Natural light from the new large windows in the sunroom coupled with layers of light—task, ambient, and accent lighting—accentuates the open space (see second photo below). 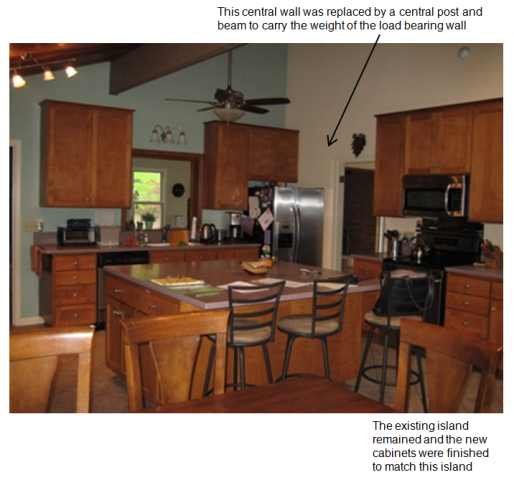 Finish selections, were chosen using a neutral color palette to compliment the natural wood that beautifully distinguishes this unique Pacific Northwest home. Salmon colored Corian (shown in the kitchen before photo) was replaced with Quantra “Truffle” quartz countertops. New maple custom cabinetry was stained to match the existing cabinetry in the home to achieve a cohesive whole. Existing tile that had been installed zealously by the previous owners was roto-hammered out to make way for new Monocibec- Domus Aurea Porcelain 20×20 tile in both the sunroom and kitchen. Kentwood Originals, Natural Maple Country Hardwood flooring was installed throughout the remainder of the space. A Kraus sink, Bosch range, Thermador hood, and GE dishwasher, all in stainless steel, are the work horses of the kitchen. 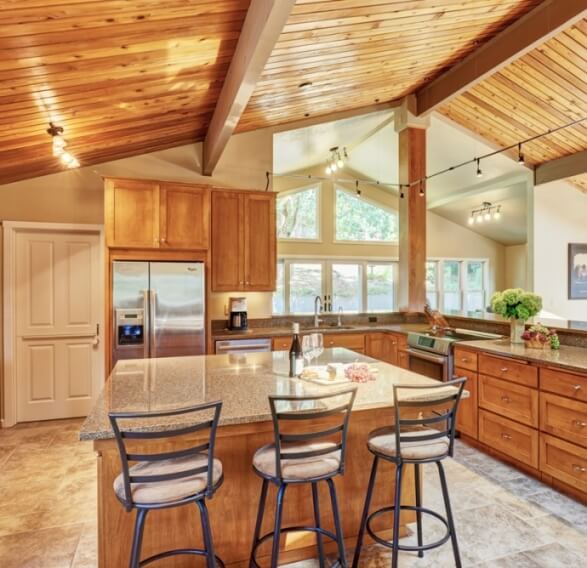 The doorway between the dining and sunroom below was removed and new flooring was added. Wood floors in the dining and living area add warmth and tie in beautifully to the knotty wood planked ceilings. New French doors bring an abundance of light into the dining room. 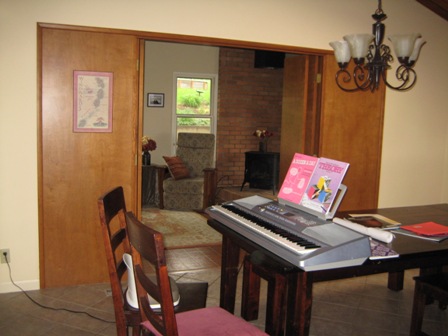 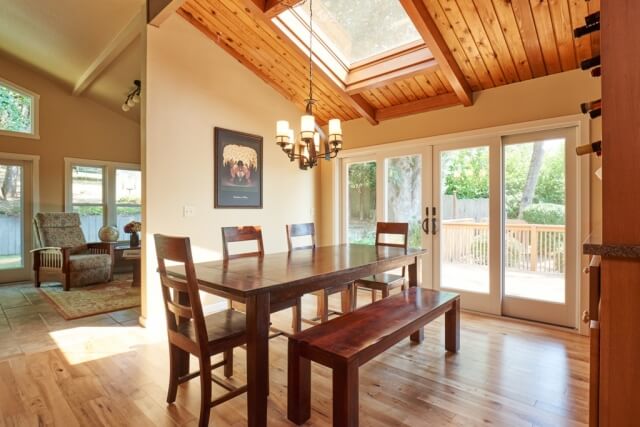 Tall cabinets (shown in the photo below) between the dining room and living room were replaced with newly designed cabinets that continue to define the space, but without blocking any of the natural light from the French doors. The structural post mentioned earlier is partially concealed in the cabinetry and wine rack. A new chandelier and sconce from Quoizel add ambiance and complete the dining room.

A woodstove in the sunroom was replaced with a Heat N Glo Fireplace in Graphite with a clear face front in the living area and Cronin Rust Multicolor stone surround, visible in the second photo below. The homeowners and their children all love to read, and they find their cozy seating area around the fireplace a perfect place to sit with a good book. 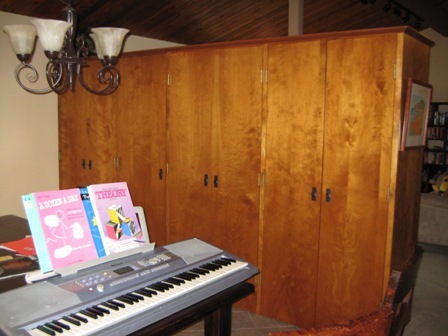 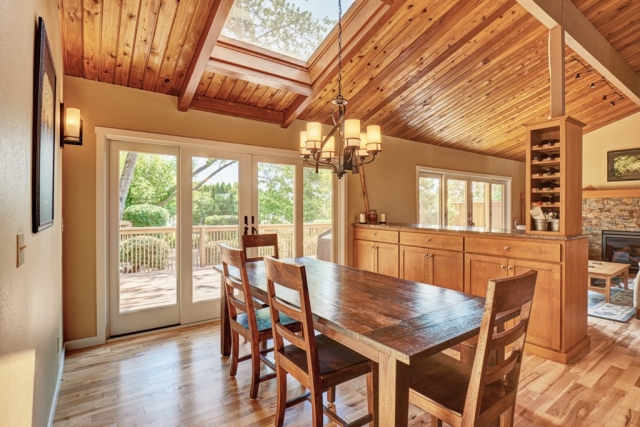 Sometimes we come across a home with great “bones” and potential to become so much more than it is. This house revealed itself to be architecturally beautiful, whereby opening up the space and adding windows allows the play of light to dance on the newly finished surfaces.

Critical components to the design include an abundance of cabinetry for storage, generous counter space for food prep and entertaining, natural lighting, and layers of lighting for reading, cooking, and other activities. With the careful coordination, planning, and selections between the homeowners and designer, this home was transformed into a versatile and open space for the whole family to enjoy!