Here’s the new dining room foundation.  At this point there are floor joists, hidden by the rim joists, and floor decking so far.  The beam that is currently supporting the existing roof will be removed once the exterior walls have been built and the roof load transferred to them.  It’s not much to look at but the foundation is a very important part of the construction because it’s the base from which the rest will be built. 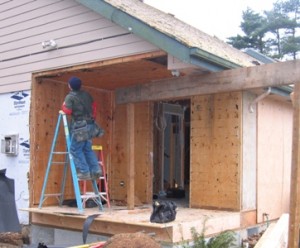 Next we’ll go upstairs where the framing of the bathroom is underway.  This picture was taken from the hallway outside the bathroom.  A beam will replace the load bearing wall.  The sink and toilet will be placed under the sloped ceiling.  This will give the bathroom character while avoiding the cost of a new dormer.  Just wait until you see the flooring that’s going to go in — it’s wild, fun and eco-friendly!

Turning to the left you can see the bonus room is starting to transform into a bedroom.  The windows on the back wall will be separated to balance the room and allow furniture placement between them.  Straight ahead a nook will be created for a built in desk; a header will be needed to support the load bearing wall we will remove to make this happen.

The living room windows are in.  The windows flanking the picture windows are windows we reused.  The wall between the living room and master suite still needs to be framed.  This wall will have the fireplace that was originally in the family room and an entertainment unit to house the stereo system. 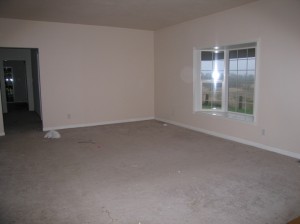 Before of living room

Meet Harvey!  His Mom and Dad, the homeowners, let him stay at the job site during the day.  This little guy loves to play catch.  When he’s not at the barn checking on the horses he’s at the house waiting for someone to throw his toy.  He is a great mascot and keeps everyone’s spirits up while he wanders throughout the project. 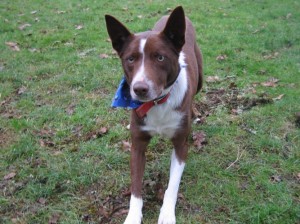 Harvey waiting for his toy to be thrown

That’s it for this week.  Next week we will reframe the north end roof, pour the footings for the load bearing posts and place several structural beams.
« Demolition
Footings and Beams »