Check out the Home and Garden section of the Oregonian to see an article on a whole house remodel that Powell Construction did for the Rose family in North Albany. http://www.oregonlive.com/hg/index.ssf/2010/07/farmhouse_flavor_a_whole-house.html

Farmhouse flavor: A whole-house remodel whips up a new kitchen that suits a rural home

Bridget A. Otto, The Oregonian

ALBANY — The old farmhouse tucked off the road was the change the Rose family was looking for. The house was the right size, the property spacious, the barn perfect for the horses, and the view of Mount Jefferson wasn’t bad. The view, however, was best enjoyed while folding laundry in the utility room tucked into a corner off the kitchen, which was a tad tight with a small island, limited counter space and an eating area Mark Rose despised. “It really was not very well thought-out,” says Mona Rose of the kitchen she endured for four years. “But it was livable.” Not quite as livable as it is now, after a major remodel kicked down some walls, re-sited the dining area, utility room and powder room, and resulted in an airy great room with an ample kitchen flanked with generous windows and anchored with an impressive, granite-topped island. In fact, the project turned into an entire house remodel.

BEFORE: The kitchen was a classic U-shape with the cooktop taking up the entire island, leaving no room to set anything down. The banister, which didn’t move, is just barely noticeable to the right of the fridge. Photo courtesy of Powell Construction
Farmhouse gallery (6 photos) 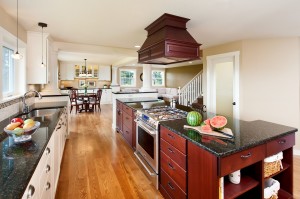 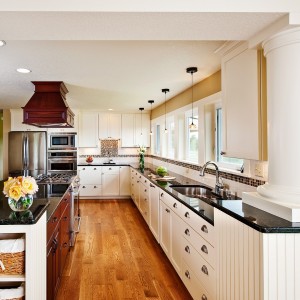 While Mona and Mark and daughter Caitlin moved into a rental in Albany, the folks from Powell Construction took over, touching every inch of the house and making a jewel of a new kitchen. Mona Rose says they’d talked about remodeling the house in stages, but then wondered why drag it out. With a lists of ideas, the Roses met with Tom Powell and Martine Ayers from Powell Construction. In turn, Ayers came back with three plans, open ears, shopping stamina and direction, Mona Rose says. “We spent hours and hours together,” she says, adding that she had a general idea of the look she wanted but was unsure about styles and didn’t want the kitchen to end up looking out-of-line from its farmhouse roots. Rose’s No. 1 goal was to get an open kitchen that better connected to the nearby family room. With a large family — five of their six kids are grown and out of the house but often return for family gatherings — Rose wanted room. Relocating the powder room that was next to the kitchen, and the laundry room that was next to that, would greatly expand the footprint. Going one step further and grabbing the space taken up by a porch just off the laundry room would allow for a roomy, inviting dining area complete with built-ins. This was a jackpot of an idea. Mark Rose so disliked where the old dining table was, Mona Rose says he never sat there to eat. 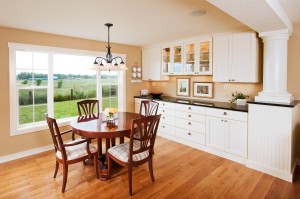 Both she and Ayers agree that choosing the materials and finishes went pretty smoothly. Despite the endless variety of everything from flooring to countertops to lightings, Rose knew what she liked and Ayers skillfully edited the selections. Although Rose says she’s not a huge fan of wood, she did want hardwood flooring. Both women agreed it was a strong “farm” look, but Rose wanted to contrast that with the cabinets, opting for creamy white painted maple. For the island, however, darker sapele wood (a tropical African tree reminiscent of mahogany) was used and it was designed to look more like a piece of furniture than cabinetry. The layout and cabinet configuration works perfectly, Rose says. Her planning and measuring of utensils, pots, pans and plates paid off with everything fitting its assigned space. Glass tiles in the backsplash add just the right touch of sparkle to the clean traditional lines of the white subway tile and reflect the colors sprinkled through the dark, Uba Tuba granite (a type of igneous rock that has a quartz and mica composition). 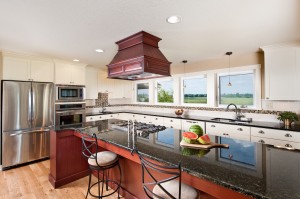 Two sinks, two dishwashers, two ovens and ample counter space allow for four or five people to be working in the kitchen at once, Rose says. After a year in her new kitchen, she says there isn’t a thing she’d change. Heidi Powell, business manager of Corvallis-based Powell Construction, credits the Roses for the success. They had their priorities and knew their budget but remained open to ideas. “That’s the ideal,” Powell says.

THE PROJECT: Change a cramped kitchen/disconnected family room into one great room while also capitalizing on the property’s view.

GETTING THE LOOK: Several material selections were driven by the fact that this home — although revamped over the years — dates back to 1911 and sits on 26 acres of farmland in the Willamette Valley. Owner Mona Rose says she wanted to guard against the kitchen’s looking like it dropped in from a different region.

Flooring: Heidi Powell, business manager of Powell Construction, liked the traditional look hardwoods brought to the room. She felt it was in keeping with what you’d find in an older farm home. Powell, Rose and designer Martine Ayers agreed that using one flooring throughout the new great room unified the space.

Cabinets: Simple, creamy white cabinets with old-fashioned pulls and a touch of bead board created a bright, welcoming kitchen with a nod to the past.

Faith Cathcart/The Oregonian
In the kitchen/dining/family room area, the Roses did away with three small rooms to create a large open great room.

Windows: Adding several windows to the new kitchen space not only embraced the pastoral views — and the vista of Mount Jefferson — but also brought the farm-feel indoors.

A FAVORITE: Formerly, when you entered the kitchen from the garage, the first stop was the dining table, which became a collection zone for everything, Rose said. Now, that area has been transformed into a mud room with hooks for coats, a place for shoes and a storage cabinet and countertop to drop keys and purses and charge cell phones.